VEGANS FOR BDS SAY NO TO PLANTX EXPANSION IN ISRAEL

To send a letter to PlantX go to:
https://actionnetwork.org/letters/vegans-say-no-to-plantx-expansion-in-israel 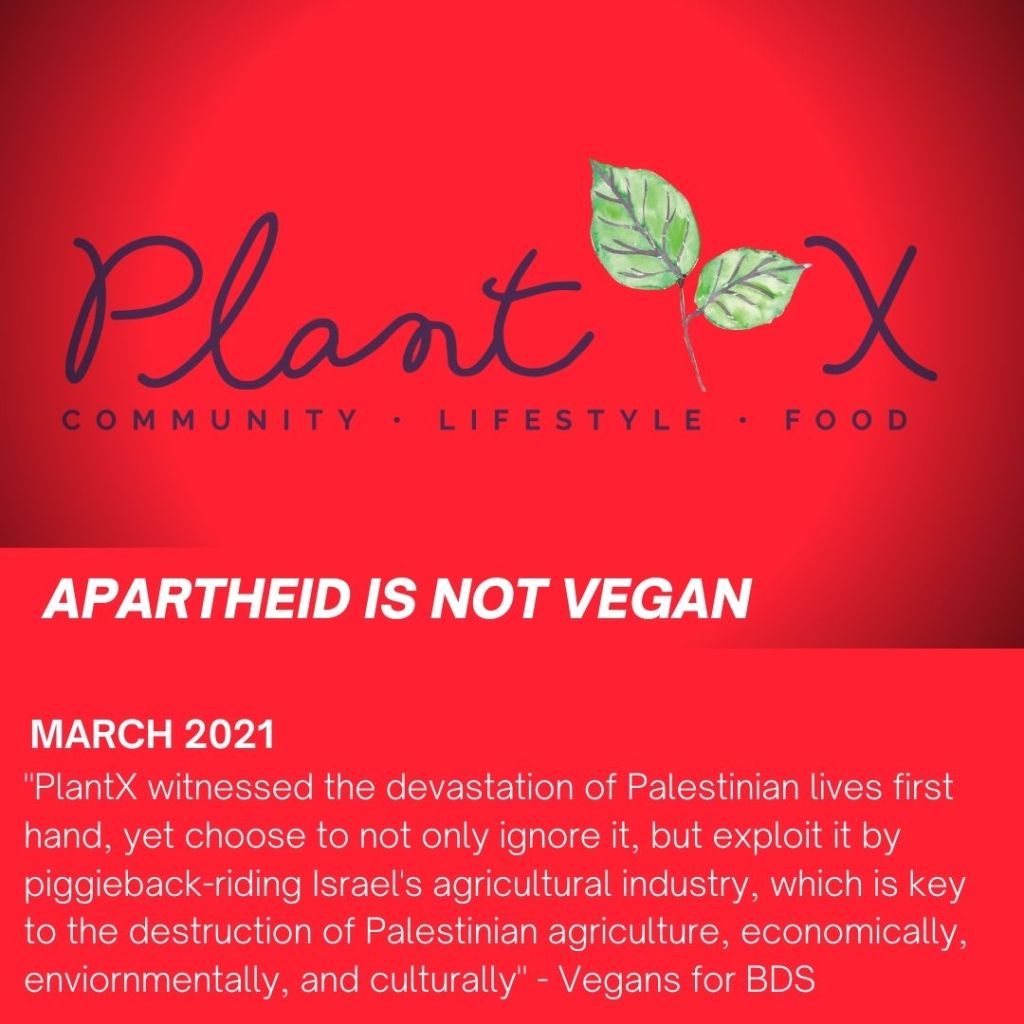 We are Vegans for BDS, a group of Palestinian and North American vegans and environmentalists. As advocates for our plant, animal, and human rights, we stand in solidarity with the indigenous Palestinian people, recognizing that the Israeli military occupation of Palestine harms the land, people, and animals there every day. As North American consumers, we also recognize that our dollars play a significant role in affecting change in global policies that can either perpetuate injustices, or call governments to defend the vulnerable.

We write to you after reading about your recent expansion plans in Israel. As vegans, we are cautious about our consumption choices. We aim to do the least harm to animals, the environment, and humans. Neither are we mere consumers. We strive to shape our world in accordance with these values. This is why we feel obligated to point out the harm that PlantX will cause, should you continue with your plans in Israel. Please hear us out; not only because we’re potential clients, but because your conscience obligates you to do so.

We trust by now that you are aware of Israel’s decades-long military occupation of Palestinian lands, forcing the indigenous Palestinian people under a military regime. Just recently, Israel’s largest human rights organization has finally agreed with Palestinian analysis that Israel is an apartheid regime (1). The details of Israel’s daily, systematic human rights violations (2) are far beyond the scope of this letter, we hope that you’ll take the time to look at our footnotes/links.

It’s relevant to mention that following an investigation into hundreds of companies working in Israel and the West Bank, the United Nations concluded that “business enterprises may need to consider whether it is possible to engage in such an environment in a manner that respects human rights” and that “it is difficult to imagine a scenario in which a company could engage in listed activities in a way that is consistent with the Guiding Principles and international law.” (3)

It is in this context that we want to discuss the $11.5 million investment made by the Israeli investment management firm, Psagot, for in order to realize Plantx’s plans in Israel(4). Keeping in mind that Israel’s economy is inextricable from its military occupation and colonization practices (5), Psagot’s investments represent numerous violations of international law and their repercussions. We’ve compiled a list of the gravest violations, and we hope you seriously contemplate the implications, both morally and legally, on your business:

In 2016 Psagot invested in a shopping mall under construction in the Ma’aleh Adomim colony, in the West Bank (6).

Psagot is a shareholder in the following companies. All but one are on the United Nations’ list of companies complicit in Israel’s military occupation and settlement colonization enterprise:

It’s also pertinent to discuss the very unfortunate fact that often Israeli companies producing vegan and plant-based products are also directly complicit by way of selling its products in supermarkets in Israeli settlements in the occupied Palestinian territories (OPT), operating its own supermarkets in the OPT, obtaining its produce– animal or plant based– from farms in the OPT, producing products in Israeli factories in the OPT, selling its products to a captive Palestinian market, providing services to Israel’s occupying army, and some companies even being owned by Israeli settlements (14). These are the same companies whose products PlantX will be selling.

In the same context, many of these companies’ vegan products such as hummus, tahini, mujadara, maftool and others are appropriated as “Israeli” national cuisine. These vegan Levantine staples have existed for millennia, and appropriating them as Israeli national cuisine is an intentional practice of erasing the indigenous Palestinian identity and culture (15).

In addition, Israel’s intentional destruction of Palestinian crops and extensive use of herbicides have devastated incomes for Palestinian farmers and heightened food insecurity for Palestinians in the besieged Gaza (16).

We’d like you to consider the political implications of doing business in Israel at this time. The now well-scrutinized Brand Israel campaign has been effective in its whitewashing– or rather “vegan washing”– of Israel’s violations of human rights of Palestinians, as we often find in social media Israel described as “the most vegan country in the world.” Numerous food bloggers and vegan activists have unfortunately taken hold of this misleading headline and frequently tout Israel’s vegetarian/vegan population, seeming to imply that this represents the state’s moral and ethical position, as well as overall representation of a view on animals. Veganwashing is a unique phenomenon within the context of Israel and it’s military occupation and colonization of Palestinian land.

PlantX doing business in Israel will inadvertently aid and abet Israel’s exploitation of animal liberation in order to whitewash its war crimes against the indigenous Palestinian people.

The investment in Israel not only ignores the suffering of the Palestinian people, but also ignores Israel’s harm to animals and the environment. Israel has the world’s largest per capita poultry-related carbon footprint, a study comparing annual carbon dioxide emissions across 130 countries revealed in 2018 (17). In the same year, it was revealed that Israel has turned the occupied Palestinian West Bank into a massive landfill for dangerous and toxic wastes since 1967 (18). A report by an Israeli rights group, noted that Israeli settlements’ wastewater in the West Bank caused the local extinction of several wildlife species that had once inhabited the area, including deer, rabbits, and foxes (19).

It is due to all this, that we ask you to refuse complicity with apartheid, human rights violations, crimes against humanity, and the exploitation of the movements who oppose these crimes; and cut ties from Psagot and cease plans to open your store in Tel Aviv.