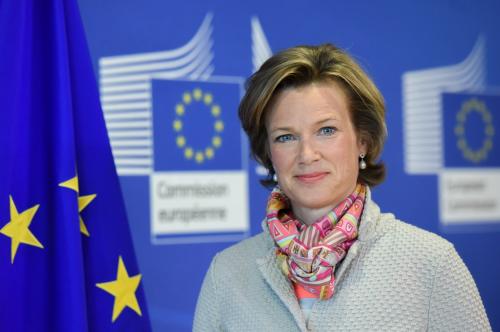 We are Israeli citizens, active against our government's violations of international law and human rights against the indigenous Palestinian people (1). We are human rights defenders who pursue democratic tools to stand up to these illegal policies, Many of us are the descendants of holocaust survivors. Our vision of justice and equality often stems from our own family histories. We oppose all forms of racism, and we uphold human dignity and liberty anywhere and everywhere.

As part of our efforts to support liberty, dignity and full equality for the Palestinian people, we endorse the Boycott, Divestment and Sanctions (BDS) campaign, called for by a wide coalition of Palestinian civil society groups. This struggle is a legitimate, democratic, grassroots-based campaign, modeled on the campaign for justice and equality in South Africa several decades ago.

It has come to our attention that on Wednesday 25.9 Israeli Minister of Strategic Affairs Gilad Erdan will be speaking at the European Parliament, alongside Katharina von Schnurbein, EC Coordinator on Combating Antisemitism, at an event titled "Delegitimisation of Israel: the acceptable face of anti-Semitism". We note that Mr. Erdan's actions, in his capacity as Minister of Strategic Affairs, manipulate  anti-Semitism to protect Israel from legitimate criticism and violate basic rights of EU citizens.  Furthermore, Mr. Erdan's  efforts to silence legitimate criticism of Israel in Europe runs contrary to the right to free speech. We believe that Katharina von Schnurbein's participation in the event may legitimize these violations of EU principles.

Furthermore, we note that Mr. Erdan's actions have nothing to do with the legitimate fight against anti-Semitism, for which Ms. von Schnurbein is responsible. Therefore, we call on you to intervene immediately and instruct Ms. von Schnurbein not to exceed the mandate of her position in the EC/EU by attending the event with Mr. Erdan. We hereby explain our call.

The Israeli Ministry of Strategic Affairs (MSA) has been promoting the compilation of secret "black lists", containing the names of alleged BDS activists. These lists are used for several purposes. One example is the prevention of entry to Israel/Palestine at border crossings controlled by Israel, simply on the basis of being suspected of holding a legitimate point of view.(2).

Furthermore, the Israeli MSA has taken action to convince banks in Europe to close financial accounts associated with Palestinian NGOs. Mr. Erdan is leading a campaign aimed at silencing human rights organizations which are active against Israel’s violations of human rights and serious in their efforts to exact accountability at the international level.

In addition, the Israeli MSA has been promoting racism. For example, its 2019 report titled “Terrorists in Suits" is premised on racist caricatures, attempting to paint Palestinian civil society organizations as essentially suspicious and violent, in order to discredit and defund them, as noted by human rights groups (3).

In view of this, we would like to express our grave concern that Mr. Erdan and his agenda are being legitimized by an EU Commission official, namely Katharina von Schnurbein, speaking alongside him.

We are gravely concerned that the EU and EC are giving a the stamp of approval to Mr. Erdan, who spreads hateful propaganda, which the EU itself has rejected as “unfounded and unacceptable” (4). Furthermore, we fail to see how Katharina von Schnurbein's position within the EC and EU has anything to do with criticism of Israeli human rights violations and BDS.

In view of these facts, we respectfully request that the EU Commissioner withdraw Ms. von Schnurbein's participation in the event, as it would amount to an abuse of her official position.

We are sick and tired of attempts to portray the BDS campaign, to which we ourselves are committed, as an anti-Semitic endeavor. We also note that several European foreign ministries have stated clearly that campaigning for BDS lies within the realm of protected free speech.

Please note that we will be closely following this case and similar ones. Furthermore, we intend to appeal to the Ombudsman and use other democratic means if no action is taken to stop this abuse of executive power by Ms. von Schnurbein.

Boycott! Supporting the Palestinian BDS Call from Within (aka Boycott from Within)