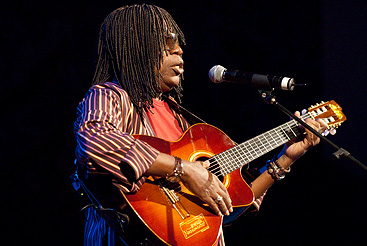 Greetings, Milton,
My name is Misha. I'm a huge fan of your work from Israel, From Travessia to Clube da Esquina to Caçador de Mim and further. Calice is a song very close to my heart. However, I was struck by mixed feelings when I saw a promotion of your show in Israel on the 30th of June, this month, in Tel Aviv. I would have loved nothing more than to be among the attendees, however my conscience does not allow me to attend.
You see, Israel is country embroiled in controversy, especially in these very trying times. Israel recently has declared itself the national land of the Jewish people and the Jewish people alone. The problem being that Israel is a land where people of many religious and ethnic backgrounds currently live, and have lived here since the times of Jesus himself.
The current government that controls Israel is a government that represents settler interests and their interests alone׳ to the detriment of the masses of the indigenous Palestinian Arabs, who are denied basic human rights, in favour of the Jewish settler population of Israel.
Israel runs a de-facto Apartheid regime in the occupied West Bank and a bloody siege of the impoverished Gaza Strip. Every week Israel suppresses the weekly demonstration, organised by the civil society in many villages in the West Bank and Gaza Strip in order to call out to the world for help against brutal and unchecked Israeli aggression. These demonstrations are often met with live rifle fire from the Israeli military stationed in the West Bank, and deadly sniper fire directed at peaceful demonstrators along the borders of the Gaza Strip. Nearly every week these demonstrations see martyrs, Palestinian men, women, children, journalists, and medical workers are getting murdered by the Israeli military, while they treat the injured.
Without rare special permits, none of the indigenous Palestinian residents of the West Bank and the Gaza Strip can make it to Tel Aviv, no matter how much they would have loved to witness a show by the legendary Milton Nascimento. They are forbidden from leaving the West Bank and the Gaza Strip by the Israeli state apparatus. It is practically the Sun City situation in Apartheid South Africa of old, but in 2019.
I ask of you personally, as an Israeli-Jewish fan of your amazing work, do not allow yourself to be used by the Israeli PR campaign to beautify this ugly situation by appearing in segregated Tel Aviv for a segregated audience. Take a stand for global human rights and say "Not in my name", like I as an Israeli Jew am repeating in this letter: I Misha Treiger will not allow my name to be used to beautify Israeli apartheid. I would hope you will do likewise and cancel your Tel Aviv show on the 30th of June.
Best wishes
Misha Treiger