From Israeli citizens to Chrissie Hynde 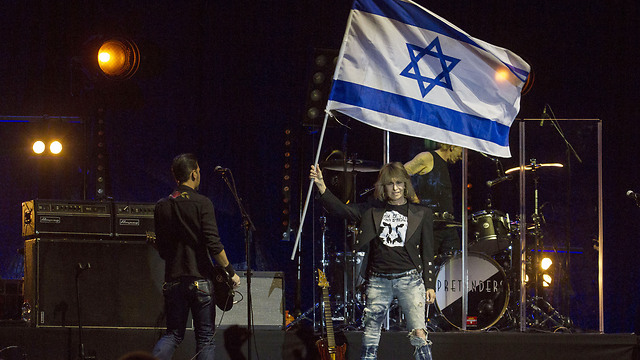 As Israeli animal liberation advocates, at a time when our own government systematically oppresses the indigenous Palestinian people in word and deed, we refuse to stay silent on either issue. It is twice as disheartening when one struggle for liberation is exploited to erase the other.

We are vegan supporters of the Palestinian call for boycott, divestment and sanctions (BDS) against The State of Israel and Israeli institutions. Our support stems from our collective decades of animal and human rights defense work in Palestine and Israel. As we boycott animal-based products and advocate for the divestment from, and sanctions of corporations and institutions that abuse and slaughter animals, it is only natural for us to support the same form of action against the institutions and corporations that bear a financial, legal, and moral responsibility for Israel's criminal apartheid system, military occupation, and ethnic cleansing of the indigenous Palestinian people.

It is rare to even see celebrities use their social clout to raise awareness of political issues, but in this day and age of intersectional politics, we expect a little more nuance from conscientious artists. Watching you raise the Israeli flag at a concert in Israel, while wearing an animal liberation T-shirt, is like receiving two slaps in the face. Israel explicitly utilises performances by international artists to divert attention from its war crimes against the Palestinian people, and it does the same with any social movement achievement.

We are afraid that you have been sent false information on Israel being "a world leader in protection of animal rights". Not only is this claim false, but it also serves to whitewash Israel's animal abuses, and to vegan-wash its human rights abuses.

We are proud of the vegan movement's achievements in Israel, but we also witness our daily marginalisation within the movement, as advocates of Palestinian liberation. Needless to say, this is not even comparable to the oppression of Palestinian animal liberation advocates, who are also languishing under Israel's racist policies. We ask our fellow vegans around the world to differentiate between the Israeli government and the Israeli animal liberation movement.

The Pretenders were sent letters asking the band to boycott Israel, and were appealed to through social media. The decision to ignore the appeals was callous enough, but waving the Israeli flag - while Israel holds millions under an unlivable siege in Gaza and debilitating military occupation in the West Bank, and while its Prime Minister applauds conferences issuing genocidal schemes by parliament members against Israel's own Palestinian citizens- that's just advocacy for genocide.

As Israeli vegans got to celebrate their activism with the Pretenders, Palestinian vegans were held back, under Israel restrictions on movement and basic freedoms. And the cows? They had a song dedicated to them far far away from Israel's lucrative dairy farms and slaughter factories.

Chrissie, We have watched celebrities utilise animals, queer folk, women, children with intellectual disabilities, and any other marginalised group, in order to be paid a fortune for a concert in Israel, at the expense of the indigenous Palestinian population. Your fans expect better from you, because you are adamant on being a political and moral role model. We hope you rethink your engagement in Israel/Palestine issues, and come to the just, right moral conclusion.